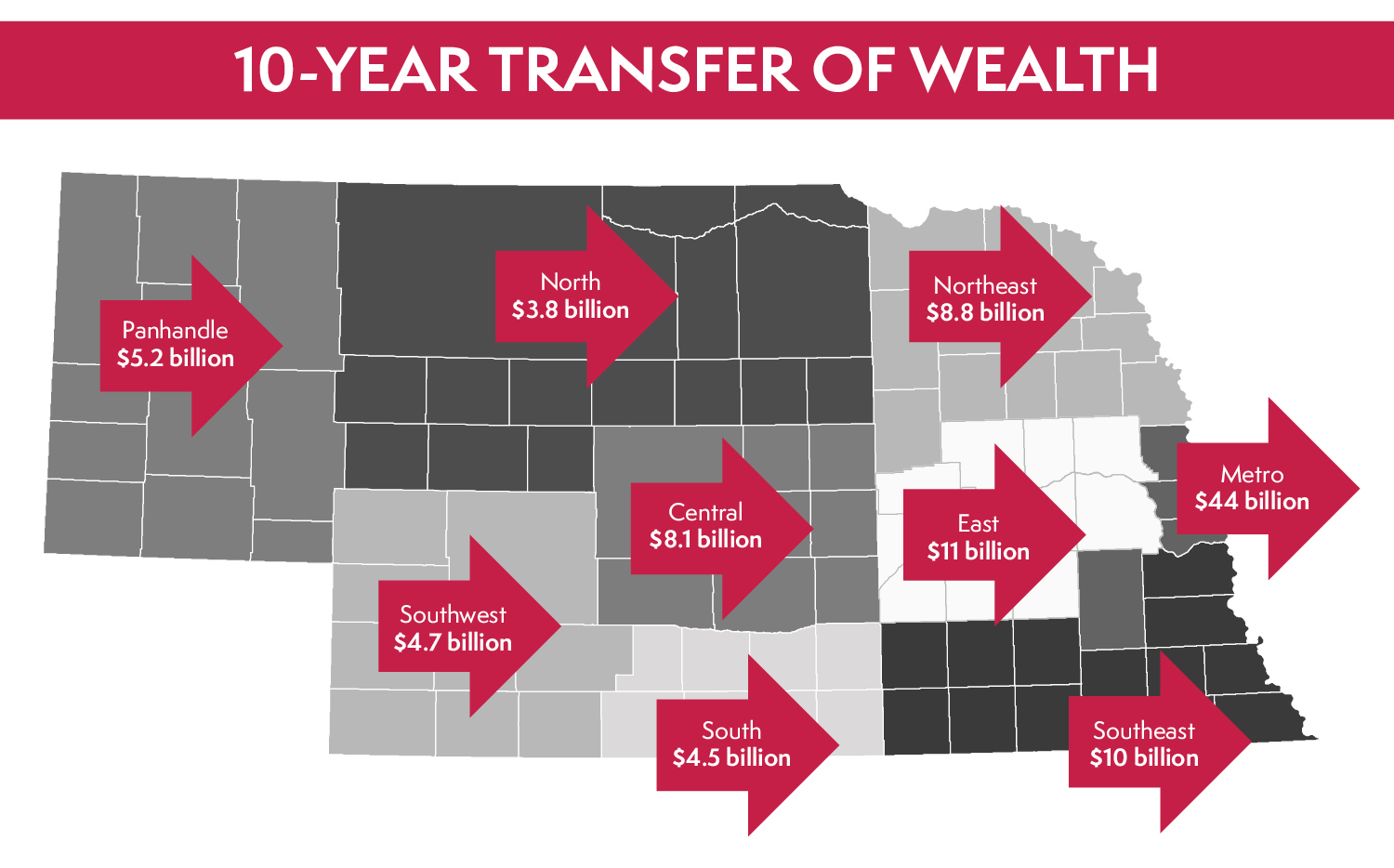 Nebraska Community Foundation (NCF) today announced the findings of its 2021 Nebraska Transfer of Wealth Study, documenting more than $100 billion in Nebraska wealth passing from one generation to another over the next 10 years. Over 50 years, the figure swells to $950 billion.

There is always a transfer from generation to generation, as parents pass away and leave their estates to their children. But if the heirs no longer live where they grew up, those critical resources leave as well. Importantly, many Nebraska counties are approaching or are already in the midst of their peak transfer years. The Transfer of Wealth Study illustrates the real urgency to act now.

The 2021 study is the third in as many decades and will be a vital tool in inspiring Greater Nebraskans to think about their communities in bigger terms. Scenarios are driven by assumptions about the future, based on historical trends, census data, increasing agricultural land values, household income and other key indicators.

The unveiling of the study findings also marks the beginning of NCF’s Five to Thrive campaign, which urges Nebraskans to consider leaving 5% of their estate to their hometown. Giving just 5% to local charitable causes would amount to more than $5 billion in the next decade – and $47.5 billion over the next half-century.

A detailed, interactive map on NCF’s website, www.fivetothrivene.org, breaks down the potential transfer amounts by county and includes information on confirmed planned gifts, total endowed assets, community success stories and more. A toolkit will help NCF affiliated funds make the most of this auspicious moment.

“If just 5% of the transfer of wealth were endowed, think of the impact that kind of money could have on education, health, prosperity and quality of life,” said NCF President and CEO Jeff Yost. “Think of how it could contribute to a community’s ability to attract quality talent and young families. Harnessing just a small percentage could be a game changer for the future of our hometowns.”

NCF affiliated funds benefitting Boone County (population 5,379) are making a huge impact in their homeplace. Collectively, the five funds have over $6 million of endowed assets and 14 donors have confirmed their plans to leave gifts in their estate to benefit Boone County in the future. In the last decade, nearly $5 million has been reinvested in the county through local NCF affiliated funds. Projects supported include the Albion Aquatic Center, Boone County Agricultural Education Center, St. Edward Medical Clinic, Boone County trails system, investments in fine arts education and afterschool programming and the brand-new Boone Beginnings Early Childhood & Family Center.

“The transfer of wealth opportunity is real. I see it in my work as a financial planner every day,” said NCF Board Member Kiel VanderVeen of Nebraska City. “It’s why I chose to make my own planned gift and it’s why our local affiliated fund is intent on reaching our goal of 100 planned gifts in the next five years.”